Ever had that moment where you knew you were supposed to be somewhere, but everything was working against you to get there? I did, just this last weekend. I was supposed to work with my boss at Worship Team Training (WTT) at the Christian Musician Summit Northwest (CMS), but his son got really sick so he had to cancel. I thought, now what should I do? I couldn’t imagine not being at CMS Northwest this year, so I asked the planners if I could volunteer. Yes! I could! So now I could go.

On Thursday night I met with Dave Cleveland who was doing a Guitar Boot Camp that day at the conference. Dave played on a couple of songs off my new album that we are working on, and one of the songs was guitar driven, that I really wanted to learn some basics for. Dave told me to email him the mp3 of the session track and he would give me some pointers the next day. After leaving, I got in a car accident. I rear-ended someone and then someone else rear-ended me. The front of my car was pretty smashed up, but I thought since it was still drivable and the headlights still worked, I would attempt to stay for the weekend instead of driving the 2-1/2 hours home.

As I drove to the conference that morning, a thought crossed my mind. What if something was trying to keep me from being present? The spiritual warfare I had been experiencing the last year and even more so this last month with my website getting hacked twice, made me think: I needed to just show up and look beyond the trials. So I went in on Friday morning, determined to see what God would have in plan for me, even though my car was smashed and I could be dealing with possible whiplash.

Yep. God had a plan. I was blessed to meet and spend some time with one of the Nashville Session Players, Blair Masters, who played keys on a few other of my songs. Then later that evening after Dave Cleveland and band performed, we were all hanging out at the merchandise table. We were joking around about how they could be my band and tour with me. So I got 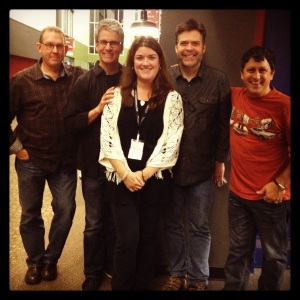 a picture with the guys for fun. We are all connected through my producer Eric Copeland, as they frequently track in session for a lot of the independent artists that hire Eric through Creative Soul to produce their projects (myself being one of them).

So that was fun enough in and of itself and I was really glad I didn’t get discouraged from the car wreck and go home early. My neck and shoulders started getting really sore that night. Dave had asked me if we could do the guitar instruction the next day instead when he had more time, so that was no problem for me. I decided on Saturday morning it would be a casual sweats day, so I dressed down and drove to the conference.

Before I got out of my car, I checked my emails. In there was an email from Dave asking me if I would be willing to join the band for his 11:30 a.m. workshop that day. He wanted to use my song Deep Into You that they had tracked in session as an example for how to work together as a band. My first email reply was “Seriously?” (my anxiety meter went up). Dave had to write me back and say “please”…etc. Of course I had to say “Yes!”, even though I felt so inadequate and unprepared. After all, I had just recorded vocals on the song a month before and hadn’t event performed it live yet. And another little voice was antagonizing me saying, who do you think you are? You are just an obscure nobody.

I thought to myself and I spoke to God…this is why You wanted me to show up this weekend?” I knew His answer was yes. Then I had my Moses excuses for Dave…”but Dave, I wore sweats today”…”Dave, you are really making me stretch out of my comfort zone”… additional excuses went through my brain (even the fact that it was being live-streamed on internet land with me in my sweats -geez!), but I didn’t burden the guitar hero with them. I mean… c’mon…. this is THE Dave Cleveland asking obscure, small-town girl, me, to sing with him and these incredible session players for his workshop. I didn’t want him to change his mind! Craziness.

But I heard these words…just show up, God’s got it covered. I took myself and my anxiety out to my smashed up car, now doubling as a rehearsal studio and practiced my song over and over again. I finally showed up at our meeting time… and then while on stage as we were prepping, I fell over a floor wedge monitor before going out there to sing. I had a huge goose egg under my knee cap.

Now if anything could take care of my anxiety, a date with my face on the floor was the perfect distraction! Nerves totally cured! By the time I went out to sing with the band, the only worry on my mind was being embarrassed at falling over on stage and wondering if anyone saw it. And then… I was in the most surreal moment of my lifetime, as I listened to the band play my song live behind me, while I sang it… oh yeah, I showed up. And that was all God asked of me. He orchestrated everything else out to the way it was supposed to go and I had to be open and steadfast. To be firm and not let my faith be shaken by a car wreck or falling flat on my face, literally.

I thought of King David in his shepherd days. He showed up every day to tend to the sheep and to protect them from the wolves and other dangers. That was his job and he did it well. He was obscure. The last of all the brothers, and never considered once by his father or brothers to be a possible choice for Samuel to anoint as the next King. But God was equipping him out in those fields for something far greater. There are many of us who are “obscure” like David the shepherd boy. We go about our lives every day, working hard at where we know God wants us at and we just show up. And it is highly likely that God will lead us to even greater things, because we show up every day in what we think are monotonous tasks but He is waiting to see if we are going to be faithful at them. While we may dream of bigger things to come, we stay in the present.

Our God is a God who is never surprised by anything, but He surprises us by using the ordinary to do extraordinary things.

So, if ever there is a doubt in your mind as to whether you should be somewhere, consider going about your plan and just show up. Even if obstacles are thrown at you (sometimes these obstacles are legit and you need to respond to them). However, they may be trying to get you off course and keep you from experiencing something greater that God has in store for you and for someone else who will be blessed by your faithfulness in showing up. After all, it’s not about us. We are the conduit of His love and mercy to others, so just show up!