I remember writing this song so well. It often happens in the morning, as I am still half asleep and starting to wake up. If it’s really quiet in the house, I start to hear a melody in my head. If I don’t get out of bed right then and there to go jot it down, I will fall back to sleep and lose it. So, I stumble out of bed with this unsung melody going through my mind. It was a bouncy tune, like a Francesca Battistelli song. Problem was, I was in the habit of writing slower songs, so it was really stretching me to get out of my box and try to think while it was too early in the morning. So I quickly jotted down the thoughts from my head onto a piece of paper and played out a scratch melody idea on the piano, then recorded it onto my iPhone (my usual M.O.). Then I went back to the bedroom and crawled back into bed.

I continued to work on the song. I wanted it to be fun and about this crazy life of being a Christian, where it seems like we are salmon swimming up the river against the stream (how ’bout that Pacific Northwest analogy?). Seriously, it’s pretty crazy as a believer, living in a world where right is wrong and left is right (so to speak). We literally have to go against the grain of popular culture to take a stand for what we believe in. But it’s okay, because it strengthens us. And one day we will reach our  goal.

So here is the life lesson in the song. I used to get mad at myself when I would spill my coffee in the mornings, when heading out the door to go to work or run errands. I started thinking about it more and more and realized, it was more often a given fact, that I would spill my coffee. Was I really going to let spilled coffee on my clothes ruin my whole day when it just started? My attitude needed to change. How ridiculous. After all, didn’t God create me to live a victorious life, not to be defeated by a measly 8 oz. cup of black java that I chose to do balancing antics with? I started to change my perspective and tune about it. I shrugged my shoulders one day after spilling all over myself, and just decided to accept it. Life was going to be okay! I even started to tell myself after a good spill, “it’s going to be a good day!” And there you have it. It’s important to not let the little things of life get the best of you. The big things either, for that matter. I now laugh at spilled coffee! 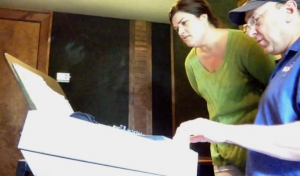 It was a writing day at Dark Horse in May 2013 with my Producer Eric Copeland. We were digging through all of my song ideas. I finally, kind of reluctantly, pulled out this last idea of the day. I told Eric he probably wasn’t going to like it. I think it was reverse psychology. He really did like it! And he came up with a nice peppy arrangement idea to go with my melody and lyrics. It was very fun to see it come to life with the ideas swimming.

It was a song that was not produced in studio, but was passed around from session player to session player in their home studios, so they had a lot of time to get into the song. In fact, by the time Mark Baldwin (guitar) got done with it he told my producer, “Little Bit Crazy is a little bit whacked!” It was so awesome, the effects he put on it. I swear I think I can hear a Galactica space ship battle in it…it’s so cool! Then Tigger and Roo come bouncing around through there. Yeah, my imagination loves this song. Gary Lunn’s bass dances all around there. I love to dance around to it! We also had a feel for some Sergeant Pepper’s in there, so we got the idea for the brass in the middle. Seems like it’s just one big parade…going silly in the wrong direction.

Bridge
I get a different view of my day, I’m not the same
Moving in rhythm with a sway, and I’ve gotta say
It’s a little bit crazy
Yeah