What makes a good tour?

There is no way that I could re-cap every detail from the tour, but I thought I would at least share some thoughts and pictures from my time out there on the road. To say the least…it was WONDERFUL! And God led me every step of the way, keeping me safe.

I did a Creative Soul TourShare with fellow roster artist of Creative Soul Records,  Skylar Kaylyn. Skylar and I did a fun co-concert 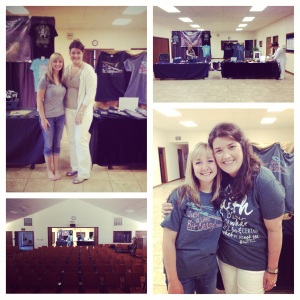 where we shared stories and songs back and forth at her home church of Wheatland Bible in Wheatland, WY.  It was there that I was introduced to Choe Hays, a promoter from Cheyenne, who came to the concert to support Skylar and hear me as well. I was really blessed by meeting Choe. We talked afterwards and Choe said he would like to help promote me in the central states and  Wyoming and we kept in touch on the tour so we could line some events up at the end if I can back through Wyoming. Wheatland Bible Pastor Jason Iacovetto and his wife Anita were such gracious hosts to allow me to stay in their home while they were gone. Anita shared her coffee with me and I helped take care of their fur and feathered family members while they traveled to a wedding back in Pullman, WA (small world, as I graduated from Washington State University in Pullman many years ago and we knew some of the same people!).

After hitting the road from Wyoming, I found out that my songwriting coach, Songwriter Champion Cindy Wilt Colville, was in Hospice care with stage IV lung cancer and not expected to live much longer. It was a shock to learn of it. Very few people knew.  I had planned on being in Nashville for some co-writing with my producer the second week of July and I was hoping to share the new CD release with her and had invited her to my house concert in Mt. Juliet. She was very instrumental in a couple of the songs on the project: The In-Between and Intentionally. But it all made sense to me then, why I didn’t hear back from her.  My goal was to try and get to Nashville in time to see her once more and say goodbye.

I made a few contacts for radio while I was on tour and sent CD’s off to Ron Corino, Bethel College Radio, KBCU 88.1 FM North Newton, KS; Arthur Payne of KBAT Christian Radio (online), Kansas City, MO; Creatures Cafe Radio Program (live and online), WWIP 89.1 The Word in Praise, Chesapeake & Virginia Beach, VA; and by the end of the tour Christian Originals Radio (online), Seattle, WA.

Stayed a couple of nights with an old girlfriend, Kim, from Port Townsend High School (WA) where I moved my senior year of high school. We hit the Chihuly Exhibit at Denver Botanic Gardens the first day. The next morning for breakfast, I reconnected with a

n old friend, Phil, from Valparaiso (IN) where I grew up. We have known each other since 3rd grade. I found out my friend Phil has a major in marketing from both his undergrad and grad schools and wants to help an old friend out with her marketing and getting events booked. Yea! Thanks Phil! I gave him a bunch of marketing materials and hit the road for Springfield, MO. 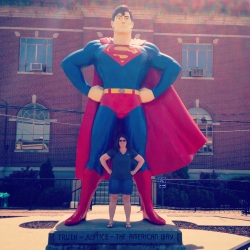 Being a tourist: A weak moment with Superman. He and I discussed taking on the world together and saving it from all the bad guys…

Then I had the longest drive of my trip to Springfield, MO to stay with another girlfriend, Mindy, from my hometown here in Sequim, WA. She and her husband Steve and daughter Charissa are some pretty big fans of mine and Mindy is the president of my fan club (which right now still seems to be an honorary title as I haven’t give her any work yet, but it sounds good)!  Mindy is a believer and huge fan of my music. She has listened to my songs from the beginning when they first start out as ideas and then to the end when they are published. She and Steve approached the pastor of their church, Redeemer Lutheran, and asked if he would have me come play at their church. As a 5 year old, little Miss Charissa had both my EP Your Love Comes After me and CD Where I Am, completely memorized. So very precious!

My tour extended over the 4th of July holiday where I had about a week of time with the Moser’s before the Redeemer Lutheran event, so I was able to enjoy the 4th with them and then Mindy helped with a booking at an Assisted Living Center. It was great being at a good ‘ole Midwest 4th of July. So much fun. We watched the parade and enjoyed the fireworks at the Trail of Tears Park. I was so thankful to be with such loving friends who hosted me, even AFTER just moving into their new home!

It was such a joy to play for the residents of Creekside Assisted Living! They were so warm and welcoming of me and one sweet older man wanted to make sure he could buy one of my CD’s. I tried to give it to him for free, but he insisted on giving me every dollar he had left in his pocket. He came up short and I told him I was running a special that day and sold him the CD for $5 off! 😉 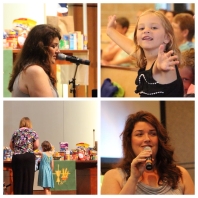 After the 4th, I had a planning meeting with the pastor early in the week to prepare for Friday’s Prayer and Praise night.  I placed

another order of t-shirts that arrived just in time for the concert. Thankfully the t-shirts were made just outside of Springfield so I was able to pick them up in their shop right there in town.

Another great friend from my old high school in Port Townsend, Shawn, lived just east of Springfield and was willing to help me with my Merch and help promote the concert in her community and church. She was the boss of my merch table! Thanks Shawn, you ROCK!

Well, it is an understatement to say that the night of prayer and praise at Redeemer Lutheran was an incredible and powerful night to see the Holy Spirit at work.  There is such beauty of joining with a current ministry for the sake of the gospel and growth of God’s people. I love that it is not about me when I am up there in front ministering, but about meeting God where He is at, joining Him at His work. Treasures in heaven.

On Monday July 14, I had a songwriting session in one of the writing rooms at Word Entertainment with my producer, Eric Copeland of Creative Soul Records.  We co-wrote a beautiful Christmas song that is currently being mixed right now by Ronnie Brookshire. I can’t wait for you to hear it! It’s a beautiful love song…and that’s all I am going to say about it for now…

On Tuesday night I had another Creative Soul TourShare event, a House Concert with Creative Soul Artist Zach Allen in Mt. Juliet.

We did a live stream on U-Stream which worked out pretty well. We even had a couple of fans tune in! Zach’s family was so generous to let me stay in their home during this trip and I really enjoyed being a part of the family and listening to their daily devotions at the breakfast table. Tina is a fantastic cook and host! Zach even showed me how to change my strings on my guitar (yes, I am still learning).

While with Zach’s family, they introduced me to Melinda Chaney.  Zach was going to be playing at an outdoor concert in the park in Stevenson, AL, with Melinda, Friday, July 18. I was fortunate to get invited as well to play with them. So that was in the books. 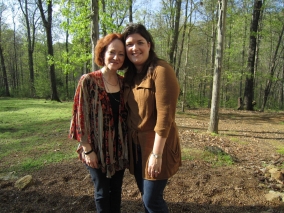 Printed in the program for Cindy’s funeral: “I received Christ Jesus, June 12th, 4 days after and from my birthday. I will try to serve him the rest of my life. Romans 10:13 Cindy Lea Wilt” – handwritten on the inside flap of Cindy’s Bible, given to her by her mother and father on Easter Sunday, April 10, 1966.

Cindy did just that. She has set quite an example for those of us who knew here and loved her. On Wednesday, July 16, many came together for the most beautiful funeral ceremony for Cindy Wilt Colville, mentor and Champion of Songwriters. About 12 out of 22 of us songwriters from Cindy’s 1st Songwriting Intensive Retreat 2012, were present and filled the whole 3rd row. It was nice to reconnect, but bittersweet as we reflected on Cindy. But because of Cindy, all of our lives have been changed, our songwriting skills have grown and we have made lasting friendships that continue to this day. We miss you Cindy.

Friday, July 18 in the morning it started raining and by noon it was determined that the concert in Stevenson, AL was needing to be canceled. Not about to let a good opportunity go to waste, Melinda and I still decided to meet with each other as I headed out to GA and we met off an exit just before Chattanooga.  There inside a Wendy’s, we blessed one another with our stories and swapped CD’s. We are looking forward to future opportunities to get to play together.

Because of the extra days in Nashville with Cindy’s funeral, I was pressed for time and debated how the rest of the tour should go with my driving schedule. I still needed to connect with my family in GA plus try and meet a connection in VA. I decided to push it and do it all. I went to Peachtree City, GA to spend a day with my grandma. I gave my MeMe her own private house concert the next day, while my family went out with friends to a movie. I set up all the equipment in my aunt’s living room and played for her just like the old days when I was growing up. She used to always come to my recitals. It was such a special moment to see her tapping her feet and hands to the rhythms there in my aunt’s living room as I played the songs off the new album to her. A moment with her I will never forget. (Note to self: make sure the keys are turned way down before you first start playing them. My 92 year-old Grandma still has a great startle response).